Taking time for A Stranger 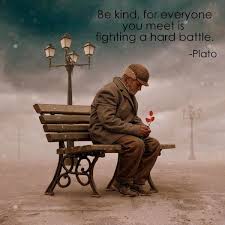 I have been waiting for my silence to be broken and for inspiration to come to write once again.

And the inspiration came on a very snowy and cold night in February.  The streets were a bit tricky to drive on and warnings spread throughout the TV and radio stations about the NorthEast Blizzard coming to New York City, Boston and Rhode Island.

As I worked throughout the day watching the snow come down like rain, I yearned to be home in my kitchen cooking up a nice hot meal. As the clock struck 5, I headed to my car and drove toward the grocery store.  I had wanted to get a quick work out in but after trudging my way through slick road conditions, home was my destination of choice.

I walked through the familiar doors of Wegmans, I must walk through them as much as I do my home and the gym, and noticed some people mulling around outside.  I couldn't quite make out what was going on so I proceeded toward the produce.  As I walked toward the oranges, an older man stopped me and asked me if someone had gotten hurt outside. and that "He would have helped Her if He were out there."  I smiled at him and proceeded to walk away when he asked me if I used Avon products.

I stopped in my tracks and thought, Now why would this older gentleman ask me such an odd question? I turned around and said "No, I use Estee Lauder."
Oh, Estee Lauder, my wife used Estee Lauder, he replied.  He continued on to say that he had  lost her about a year ago and that he  was going through a cabinet recently and found some Estee Lauder perfume she had worn sprayed it into the air.  "I shouldn't have done that" he said quietly.

I saw the pain in his heart come through his eyes. I reached out and touched his arm, looked into his eyes and said that I was sorry to hear that.

He thanked me and proceeded to tell me that he needs a 50 year old woman or maybe a 45 year old woman to spend time with.  I almost choked as I just turned 50 not six weeks ago!

He went onto to say, "I work out every day young lady! Look at me, how old do you think I am?"  So, I told him that really I wasn't too good at that game.

He said I am 78! Do you have a boyfriend? Oh boy, I knew that was coming! Although I didn't have an "official" boyfriend, I said I did anyway.  I didn't want to hurt the older mans feelings by turning him down for a date.

As we continued to chat, we turned to see beautiful tulip bulbs  set in glass vases that were for sale. They were bright red, orange/yellow and pink.  I cherished the view and said that these sure made you feel good in the midst of a snowstorm.

This sweet ,older man told me that if I were his girlfriend, he would buy one for me.  I knew that came from his heart.

I didn't have a sweetheart to celebrate this Valentines Day with and nor did this older man, however, that brief encounter warmed my heart and I hoped it gave him a bit of joy as well.

And so my dear friends and readers, although we don't have that special someone in our lives that we wake up to each day, take the time to talk to a stranger, give a smile to someone, surround yourselves with those that lift you up.  Love will fill your heart.