Is this how our Story Ends as a Country? As a world? 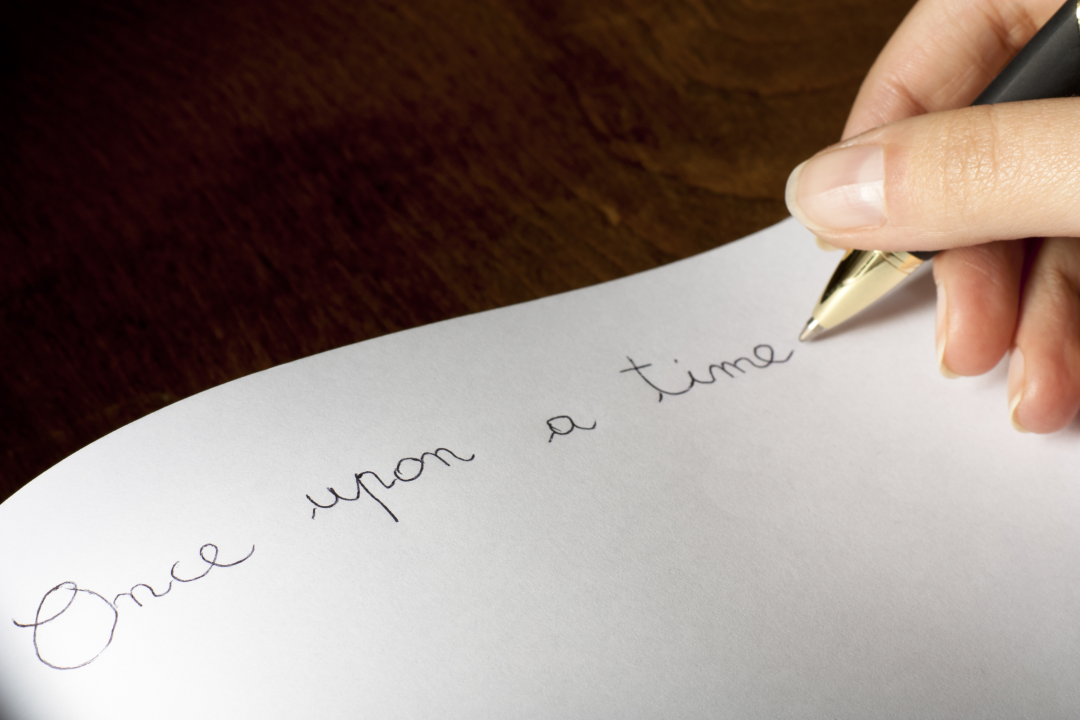 Our country has spent the last, almost 18 months in turmoil. In fact, perhaps it's not just our country , but the world at large. As I listen and experience these times, my heart is saddened to see what we as a human race has allowed to happen.

We have allowed fear to drive us to divide ourselves from each other. Everyone is so busy fighting for their position on whatever is the topic at hand, the elections, the virus, how the virus has been handled and now it's the vaccine - that we forget what is truly important.

What is truly important? Do we want to continue on this way? I know I don't.

Employers are looking for excuses to fire good people. Friends are leaving friendships because of the vaccine. Divorces are happening because we have been locked behind doors for way too long. Businesses that we once loved, totally decimated, gone for good. People's livelihoods totally destroyed. Our mental health is being challenged everyday. Depression,suicide, domestic violence is skyrocketing. Employers are being put in no win situations regarding mask wearing/vaccine/no vaccine. Employees are challenged with potential vaccine mandates/ job/no job.  Government agencies are going after good people who have dedicated their lives to help and heal others, all because those people might not agree with what is being done? or they perhaps might have another solution to solving this health crisis other than a vaccine?

Is this how we want to be? Really?

I have struggled like many others have these 18 months. With many of the above issues.

But as I step back today I have to ask myself and I ask all of you, 10 years from now, is this how we want our story to be written in the history books? How do I want my individual story to be told ? How and who do I want to emerge as from all of this?

I challenge everyone as they walk through their lives today, the next week, the coming months, to think about this. Are we going to start building a bridge to close this chasm of fear that has been created or are we going to let this ruin us?  Are we going to choose love over fear?

Posted by Kimberley Barker Nightingale at 10:22 AM 0 comments

Have you ever made Decorating and Design Mistakes? Yep, me too!

I am in the midst of a redesign/remodel of one of my guest bedrooms. I rent two rooms in my house on Airbnb and I decided that the original trundle bed just wasn't doing it anymore. So, I sold it and bought a full size bed with this whole lighter/cleaner/softer look in mind.  I searched for a few days for the inspiration, looking at beds/mattresses and telling the mattress people - "I need the vision first"

They thought I was crazy and just wanted to sell me a mattress - ugh..

Well, I met this woman at Metro Mattress who took the time to brain storm with me for 45 minutes about what type of bed would be suitable for the room. We combed amazon and other sites together until I found some inspiration. She was awesome and guess what? I bought a mattress from her because she took the time and knew what I needed.

I bought sheets, bedding, headboard and foot board along with a rug from Pottery Barn and bonus, it would all be delivered before my guest would move in!

Here are some pictures of what the room used to look like, and my idea for where I was headed: 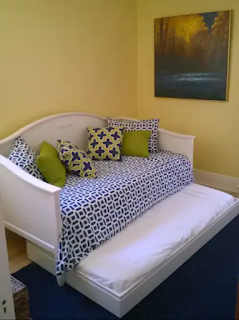 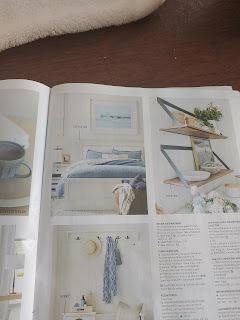 The room is small so I wanted it to appear bigger than it was. I don't particularly love white walls, but I was going for it anyway. After all, it's just paint and one can always repaint.

I called my friend and handyman, Mark, to inform him of my plans and that we needed to repaint the room. We have been working together for several years now , so he is used to my "impromptu ideas and best laid plans."

He started prepping the room and told me that the hole in the ceiling that had a cover on it, had no power going to it. Ugh. You see when I first renovated this room after a house fire, I turned it into a laundry room and the lighting was focused over the washer and dryer, not the center of the room. So, okay, now, let's call the electrician and get him out here to figure out how to get power to the center lighting area. Hiccup number one. We would solve this issue once the electrician gets here. One solution so far to this issue: Put a light on the dresser. Thank you to the Pottery Barn saleswoman, Taylor for brainstorming with me.

Regardless of the electrical issue, the painting began and I was skeptical- it was "white." When he was done painting, I actually liked it with the wood doors that are original to the house.  Here is a picture:

I actually started to love how it was turning out. And then, I looked at the floor. As you can see by this picture, the floor is a light wood. When I renovated the house after my house fire, I had all new floors put in. They look a lot like the door here in this picture. But notice what I did with the floor in this room: light wood. I wanted to differentiate the room from the others because it was designed to be the laundry room. In retrospect, i should have put the same flooring in this room, after all it was originally a bedroom. Is this Hiccup number two?  I decided, no, I was going to work with it. I would need to warm up the room anyway as I had a lot of white, glossy furniture in the room. Solution: So, I would buy a rug that would be cozy and neutral - it would take your eye away from the floor and onto the bed. This would be the plan. I would remove the navy blue rug.

The painting got completed and I received the new rug and bedding. I was so excited, it was all going to come together easily and effortlessly. Well, no, it didn't. The rug came and it was more grey than beige/oatmeal which is what it was labeled as. And the blue and white check bedding, it wasn't the right blue - it was more of a faded blue versus the crisp, light coastal blue I was envisioning. Hiccup number three: Bedding and rug don't work and guest is moving in in two days. Solution: I used the existing rug and bedding as they matched well with the white furniture.  I called Pottery Barn and talked to one of their folks on the design team. We brainstormed ideas and came up with the second choice and a new rug. It should be arriving in another week. Cross your fingers!

This room is still a work in progress. Yes, my guest has moved in, thankfully she is a prior guest and is totally understanding with the transformation.

What is the moral of this story? I think most design projects have their hiccups. I see it on most of those design shows on HGTV. The trick is to work "with them" and not against them. Yes, some hiccups will cause you to demo a wall, or fix some foundational issue, but a lot of them can be less expensive and more creative fixes that won't cost you that much.  Be creative, find resources to help you, and as one of my teachers, Marie Forleo says " everything is figureoutable!"

I will keep you posted on the progress and I will do a room reveal when it's done!

Have a Thankful Tuesday!

Posted by Kimberley Barker Nightingale at 11:13 AM 0 comments